The Digital Transformation of Life and How to Adapt to it

All the current talk about AI and automation conjures up images from the Jetsons or the more sinister HAL 9000. The reality of AI is far more mundane.

Nearly all of us use some form of AI on a daily basis, and automation has become such a central part of our workplaces that most people hardly notice it.

Technology has become such a part of daily life, that we tend to overlook just how often we use it. Did you ask Siri to set your alarm for you this morning, look something up on Google, use Uber to get to the office or have Spotify pick out your playlist today? Maybe Alexa reminded you that you were running low on something. Congratulations, you’re already using AI. The list of possible ways to interact with AI goes on ad infinitum.

That’s just consumer facing AI. Most businesses already use machine learning or AI to improve logistics, make predictions or even interact with customers. Thus far, there haven’t been any cases of Siri going rogue like HAL. So, what’s all the hype about and what’s AI anyway?

Simply put, artificial intelligence is when computers do some form of thinking or decision making on their own. If you’ve ever tried your hand at programming, you’ve seen that computers are exceedingly dumb and literal. In programming, there’s no wiggle room for what you mean, only what you explicitly tell a computer to do. This is fine as long as you plan to use a computer for tasks that entirely predictable. For the 99.9% of life that isn’t entirely predictable, teaching computers to think was in order.

If we ever have AI overlords, they’ll probably mark February 10th, 1996 as their coming of age. That’s the first time a chess champion lost to a computer. Kasparov still did humanity proud and came back to win the match. Nonetheless, the writing on the wall was clear. The following year saw IBM’s Deep Blue defeat Kasparov over the course of a match. Humanity 0, AI 1. 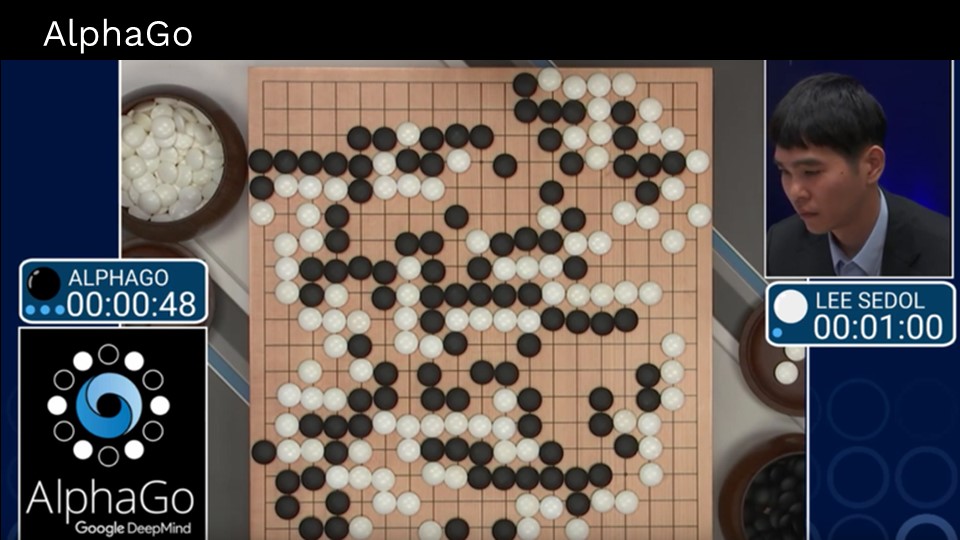 Go and chess both have finite, although vast, possible game positions and all information about the board is open to each player. Certainly, no-limit Texas hold ‘em would be a different story since decisions have to be made based on limited information with theoretically infinite outcomes. Furthermore, extended play requires bluffing and other characteristically human qualities. Some of the best human poker players in the world lost to Libratus in heads up play in 2017. Humanity 0, AI 3. 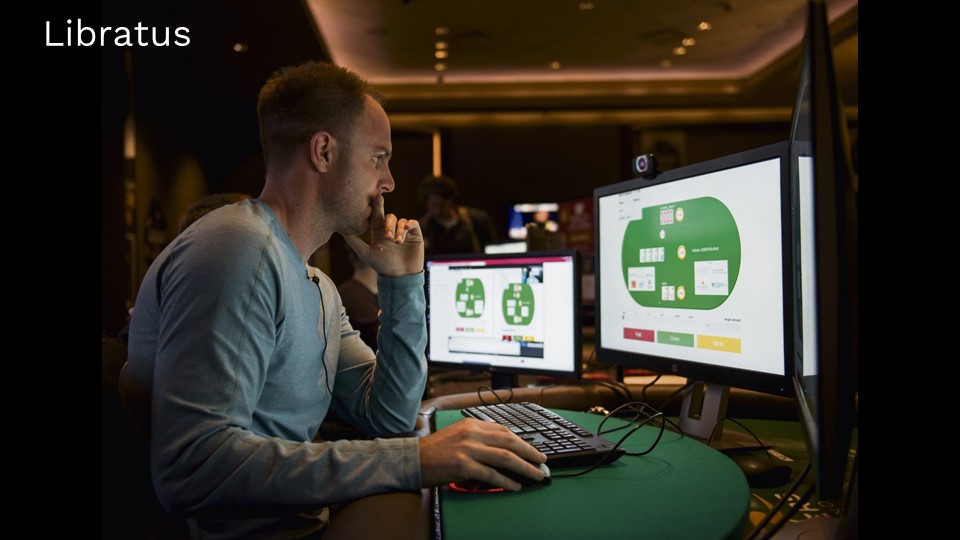 The ability to learn is what made each of these victories possible for AI. In practical terms, this means that computers can be trained, much like humans, to perform complex and demanding tasks. Assuming you have enough processing power, data and time, computers can learn to outperform humans at a wide array of tasks.

A computer that can beat you at poker might seem like little more than a parlor trick, but the same technology that learns to play poker can also learn to do many jobs that humans perform. For employers this is an obvious boon. Automation is reliable, produces routinely accurate work, doesn’t need time off and at the right scale is cheaper than human labor.

The scope of automation is staggering. McKinsey estimates that about 50% of American jobs are susceptible to being automated. The jobs most at risk include anything that deals with processing data and repetitive motion: office and administrative support, food preparation, sales and transportation. There’s even a handy website that lets you know whether your job will be replaced by robots. 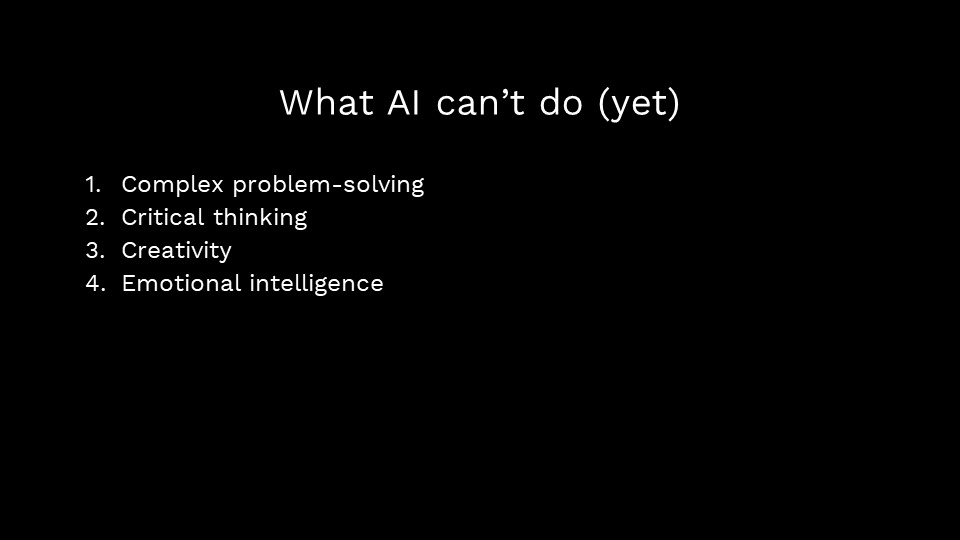 Tempting though it may be, the way forward isn’t to become a modern luddite destroying servers rather than looms. Instead, the economy of the future will value skills that are uniquely human. As powerful as AI is, there are still areas that technology hasn’t made much headway in:

Our revolution in AI needs to be accompanied by a revolution in education. Instead of training people to enter professions that are easily automatable, STEM (science, technology, engineering and mathematics) ought to be at the core of our school systems.

Public figures as diverse as Stephen Hawking and Snoop Dog have been calling for everyone to learn programming. A strong STEM education for all on top of teaching critical thinking, creativity and EQ is how to prepare a workforce to handle higher level tasks while AI takes care of our more mundane needs. 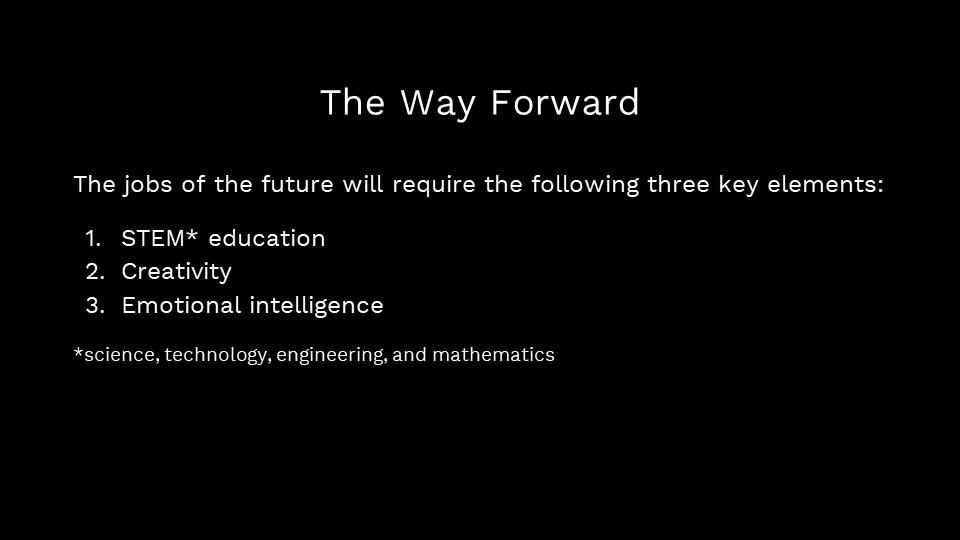 There’s no need to see AI as a threat as long as you are continuously learning skills that will be relevant in the future. Just as the world has continued to function without lamplighters and bowling alley pinsetters, we’ll be just fine with the next round of automation. In fact, technology creates jobs; imagine trying to tell someone from 100 years ago that thousands of people would be working as software developers!

The future looks bright for STEM. The Department of Labor estimates the average STEM worker makes double the national average and that STEM jobs are growing faster than jobs in other fields. Technology is creating entirely new fields such as robotics, drone engineering and data analysis. In much the same way that economists are finding that e-commerce has created more higher payer jobs rather than ‘replacing’ cashiers at brick-and-mortar stores, AI and automation is paving the way for more high quality jobs in the future. 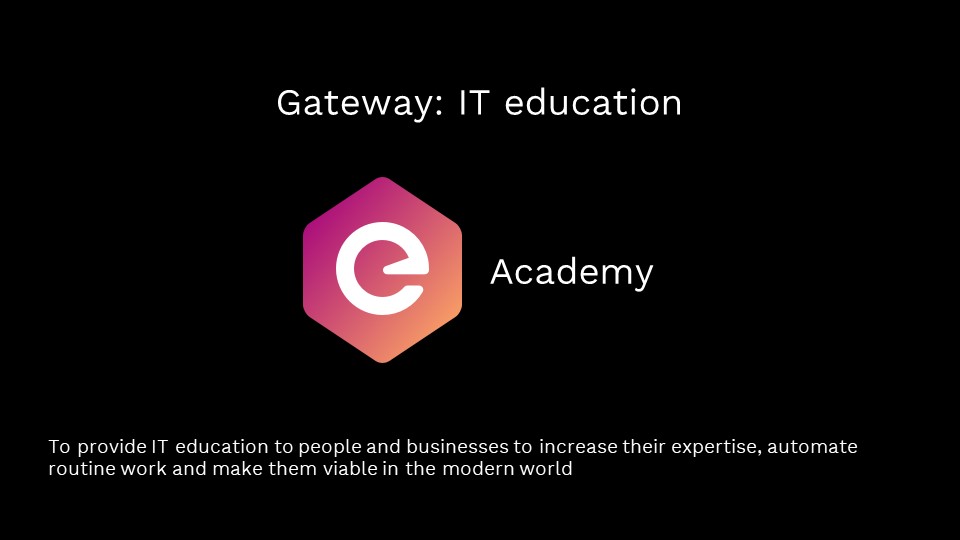 That’s why at my company, eTeam, I’ve always taken the approach of offering as much training as possible. We’ve even created the eTeam Academy to encourage that offers courses in relevant technology and trains a new generation of developers here in Kyiv. Similar coding bootcamps are springing up all over the world. It’s both easier and more important than ever to take up the challenge and learn the skills of the future.  So rather than fearing AI, let’s embrace the opportunities that AI is opening up for us.

Based on my presentation at the Future of Work in Kyiv.