Once you’ve decided that you’d like to open an e-commerce site, the last thing you want is for software to get in the way of your primary business. Thankfully there are several mature e-commerce platforms out there that are worth considering.

There’s no one-size-fits all solution for every merchant, but let’s take a look at the pros and cons of Magento, Spree and Solidus.

When you have the choice to use an open source and free platform that performs as well, if not better, than the major proprietary platforms on the market, this should be a no-brainer. In the case of e-commerce platforms, the three leading open-source solutions offer extensive customization, tried and true stability, ongoing security support and large developer communities. That’s why eTeam highly recommends looking to Magento, Spree or Solidus as your first choice.

If you do go with an open source solution, you’ll still need a developer or even entire team to design, code and maintain your store. The advantage of hiring your own development team is that you can get exactly what your company needs without having to force yourself into a cookie cutter mold that may not really fit your vision.

We’ve been working in the retail and e-commerce scene for ten years at eTeam. We’ve developed a lot of best practices and insights along the way that we’ve made available in our free Retail and E-Commerce Report.

Kleenex is to facial tissues as Magento is to open-source e-commerce platforms. Well, not quite, but still pretty close. This is the first place to look, in any case. You can find plugins for anything you can imagine and some truly stunning shops are built with Magento. 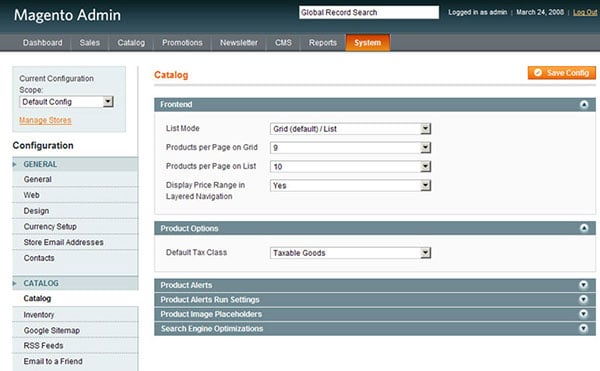 Magento is massive. As in twice the size of its closest rivals, Spree and Solidus. This means more built-in functionality, but it comes at the cost of speed. The question to ask yourself is whether you need all of the extras that Magento offers out of the box. In many cases you’re shop doesn’t, but you still have to ‘pay’ for thee unused features in speed and code complexity.

The technology under the hood is PHP, so finding developers or even getting your own hands dirty with code isn’t difficult.

If Magento is the Goliath of open source e-commerce platforms, Spree is David 1.0—that 1.0 bit will become important when we look at Solidus. Sleek and fast yet powerful, Spree runs with Ruby on Rails on the backend. 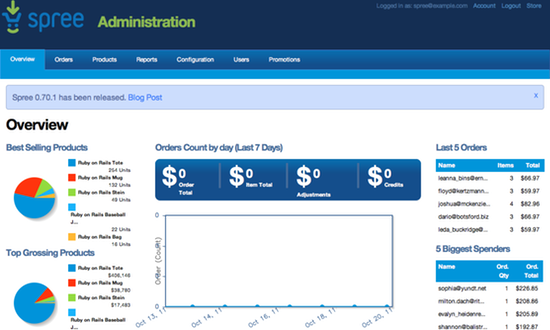 There are plenty of neat shops built on Spree and developing on the platform is straightforward thanks to the Rails framework.

This would be case closed, but…

Solidus: the fork in the road

The main backers of Spree pulled out of the project in 2015. It looked like Spree was going to wither away, but a group within the community forked the project and took it in their own direction. 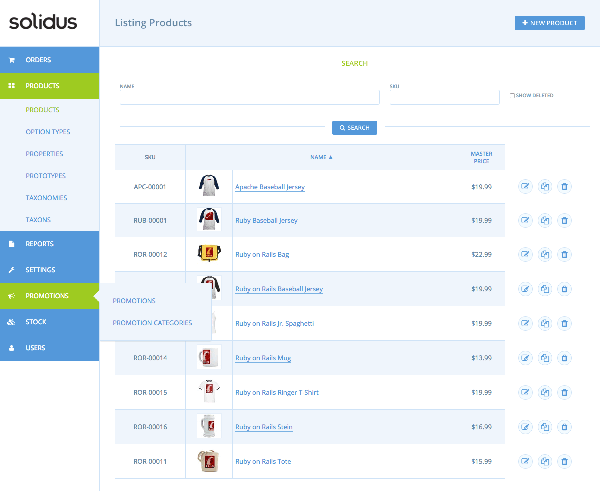 Solidus was born as a fork of Spree 2.4. Even though Solidus is the new kid on the block, it still has all the development history of Spree.

This is my hands down winner for a new site. Not only has much of the old Spree core community moved over to Solidus, there’s a lot of new buzz here, too. This means that the platform is the way of the future, will be supported for years to come and already has plenty of developers and plugins to build whatever you need.

Rumors of Spree’s death turned out to be greatly exaggerated. After its near death experience, the community has regrouped and is once again showing promise. It’s hard to be certain, but trusting Spree for a long-term project looks viable.

APIs are at the core of what makes an e-commerce site run but can introduce serious vulnerabilities. Integrations and payment platforms rely on APIs to work, so avoiding them isn’t an option.  Regardless of the platform you end up choosing, make sure you use an API scanner such as Sapience to protect your store from vulnerabilities.

This isn’t a hypothetical problem. A cross site scripting vulnerability previously plagued many  Magento sites and led to customers having their credit card info stolen.

Which one should I choose?

You could go with Magento, but I liken the choice to settling on McDonald’s while you’re on vacation in Italy.  Sure, it’ll fill you up, but there are better choices right at your fingertips.

If you are looking to start a new e-commerce store from scratch, go with Solidus. You get all the best points from Spree’s history plus the forward-looking community surrounding Solidus. Spree 3.x is a choice to consider, but it’s still not certain how extensive the Spree revival is going to be.

One the other hand, I don’t see the need to jump ship if you already have an operational store on Magento or Spree 3.x. The advantages of Solidus don’t justify, for now, the costs of migrating.

The trickiest case is if you have a store on Spree 2.x. You could make the case either way for migrating to Spree 3.x or Solidus.

We’d be happy to talk shop if you’d like to set up a new e-commerce store or have an existing one that could benefit from new features, optimized hosting or more comprehensive analytics. Feel free to drop us a line!