Big Data for car dealers and automakers: the idea and monetization

IHS Automotive predicts that by 2020 about 152 million “wired” machines will generate up to 30 terabytes of data per day. Any business capable of using this precious resource with all competence will obviously come out on top. Let's talk about what data can actually be used? What is required to do this?

Amazon’s Simple Storage Service S3 alone within 10 years of its birth, stored over       2 trillion objects, each up to 5 terabytes in size.

It’s not that useful yet, but the volume is definitely impressing. 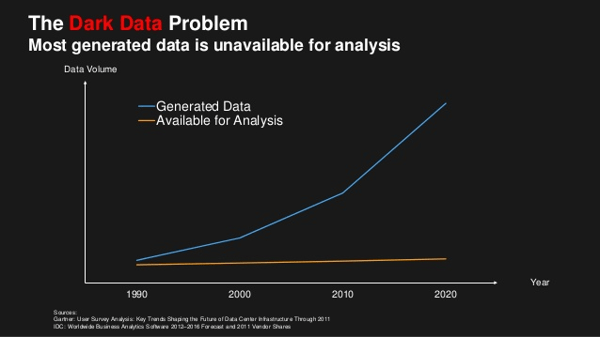 Let’s take a look into it

Digital technology is changing the world. Today, the things we use are not just “things” anymore. Tesla cars are probably the best example. The majority of modern cars have a connection to the Internet, they can store and stream digital media, provide access to necessary information and Teslas even receive software and full firmware updates.

Things we use are now more and more often designed also as data and media centers that have access to the Internet. They are part of a bigger network of the same things and are overgrown with new opportunities. Everything we use today is becoming a part of a huge data network.

The success of work in this direction depends not only on the characteristics of the modules installed in the machines and devices we use, but also on the services that use, analyze and process the mined data. That’s what allows businesses making the right decisions and effective predictions.

Big Data in the automotive market

Today a car allows you to collect information about:

Just this information alone presents a reliable set of data to conclude what the driver’s riding style is or design a transportation map, along with knowing where the driver lives.

The analysis of such data "in bulk" is even more interesting.

Building a map of the movement of vehicles, you can determine the target audience of a certain model and their typical habits. The spectrum of use of such data is quite wide. Business models monetizing the unstructured data can be very diverse.

Big Data is good for pay-as-you-drive insurance companies and credit providers. How?

You can determine the driving style of the car owner and the degree of probability of an accident. It is done by gathering and analyzing data on the average driving speed, periods and frequency of acceleration and deceleration, i.e. it will allow more granular price calculation than it is now.

Insurance rates calculation: this approach gives responsible and accurate drivers the opportunity to get a discount, for example, on insurance.

Interest rates calculation: the case is similar to bank loans. A person drives a car carefully, why not give them a loan for a new car with a reduced rate next time. The risks that the bank pledges at an interest rate will be slightly lower.

Analyzing telematic data makes it possible to create a kind of “electronic advisor” telling you what gas station is more convenient to drive in, which route you should take to save fuel, time and money. The system can report when it’s time to visit a car maintenance service, and not just based on the mileage data alone. The analysis of the service data of all cars of the same configuration and similar usage conditions makes reports, advice, and predictions even more precise. 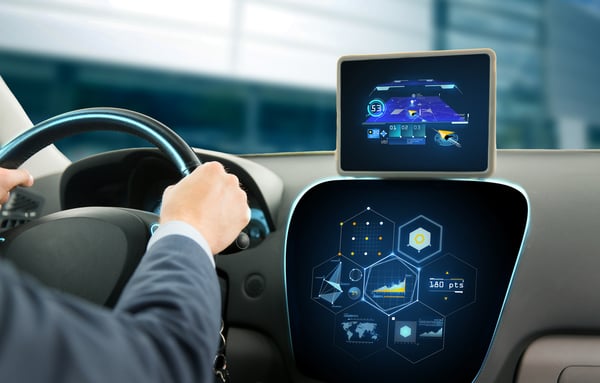 Analyzing the data from all cars of a certain model of a specific brand from the same factory conveyor, one can predict:

The data on where and how the car was operated makes the visual inspection much more effective, allowing us to understand the reasons for some seemingly unexplainable breakdowns.

In theory, if the driver demonstrates a consistent driving style from year to year, and then suddenly changes habits, the system can identify it as an anomaly and signal about it.

What will the signal be? It depends on the profiling of behavioral patterns. The system may call an ambulance, a police squad, or simply shut down the engine, or enable autopilot, etc.

Correct analysis of anomalies in driver’s behavior will be possible only after analyzing huge amounts of data from a large number of cars since it is necessary to identify patterns of behavior that would unequivocally indicate an emergency situation.

Situations that can change the driving habits pattern can be different:

Stats for car dealers and automakers

Where and how the car is operated? What difficulties arise and how well certain components function?

All this data is very interesting to car dealers. After analyzing it, automakers will be able to identify the systemic issues of the series or model and fix them in new versions. Dealers (based on this data) will be able to plan spare parts purchase deals and provide repair services.

Such data analysis systems are already used by many dealers and are being tested by manufacturers. The latter are likely to establish and refine the process pretty quickly, thus we may soon see similar solutions in commercial operation.

Another area of ​​application of “big car data” is working with after-sales (and can be applied to every stage of marketing funnel). Detailed information about vehicles and their owners will allow you to identify deeper patterns in their behavior, their needs, preferences and give room for developing ways to retain them.

Additional information about car owners and their movements allows you to target ads at both drivers and their passengers.

For example, the collection of data from a large number of cars may show that mainly families with children pass by an advertising banner along the road. How do you know? You can find it out by tracking cars that regularly park near schools and other institutions. Roughly speaking, ad targeting techniques that have long been used online will be available offline.

At the same time, it is possible to apply cross-marketing and create a personal package of offers from partner companies (shops, leisure centers, etc.). Analyzing their movements and driving style, dealers, gas station owners and other service providers will be able to precisely target them.

All of the above is made possible by analyzing the data already collected. Imagine what opportunities will open up in front of the market if the car starts to “communicate” with the surrounding connected objects (other cars and road network elements), responding to their actions or collecting information about the driver's reaction.

All of the above is very cool in theory but is not available so far on a grand scale.

What do we have today?

Technically, everything is ready for the transition to the era of connected cars:

Are they ready to innovate?

It makes sense to speak about being innovation-ready from two angles:

The market is, theoretically, ready. More than half of all cars sold globally are already connected. Visiongain believes that Big Data is one of the fastest-growing segments of the automotive industry. This indicates the high demand for big data analysis. At the same time, automakers that are not yet taking initiatives are being pushed by investors and shareholders.

Nevertheless, the purely technical barrier still prevents the active movement in the direction of Big Data: the closed data exchange protocols in cars do not allow you to easily and quickly collect all the information from cars of all brands on the market. Perhaps the situation will change once a certain standardized protocol will appear, but not now.

Is the mass user ready yet? It is difficult to make any conclusions now. Like any innovation, services based on Big Data analysis have their supporters and opponents. For example, drivers with aggressive styles are unlikely to enjoy their insurance rates after companies analyze their data. On forums and blogs, the very idea of ​​collecting data from cars causes the same controversy as Google’s analysis of user behavior with devices and the Google search engine. One group enjoys new functionality, while the other group protests against “total surveillance” and freaks out about the insecurity of their data. Anyway, the ball keeps rolling.

Implementing Big Data analysis from scratch implies large intellectual and financial investments. Naturally, not everyone can pull it off alone, so some things are better to be delegated.

When creating Remoto, Bright Box company took on research and development and delegated the installation of equipment to automakers. So, the device becomes an additional option of the car, providing users with a number of convenient and useful functions.

The situation is somewhat more complicated with personnel proficient with Big Data. This is a new market and the “right” approach has yet to be found. Bright Box has been forming their team for several years, focusing on active specialists with a creative approach to work.

Are there companies doing all that already?

Remoto is one of the examples of a platform for working with large sets of automotive data. It allows you to collect information about the car, manage part of its functions and communicate with the very "brain center" — the cloud — to transfer this data. 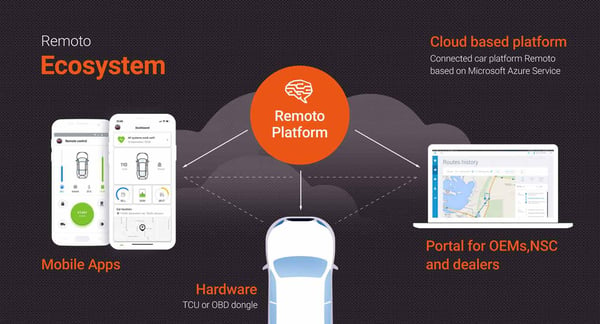 At the moment, Remoto works with Kia, Nissan, Infiniti, Toyota, Genesis, and Honda cars. Integration with the products of other automakers is also technically possible. Only small customization of the software is required to expand the list of supported models. It implies interaction with manufacturers and their agreement to introduce similar technologies.

A Remoto module with a SIM card is installed directly by the manufacturer (as part of the standard configuration) or by a dealer (as an option). It is important that the installation does not violate the vehicle safety perimeter since the solution can be integrated with the factory anti-theft system.

The job of the telematics device is to receive information from onboard systems, transfer its raw data to the cloud, then receive commands and transmit them back to onboard systems. The frequency of data transfers is determined by system settings. The remote diagnostics data is only transferred 2-3 times a month, each time a diagnostic is run.

The app allows you to:

There are more than 50 features and services in total.

The server part is based on Microsoft Azure cloud and cloud portals for dealers, automakers or insurance companies. These groups are the main users of the collected driver data. An API is provided to integrate the portal with the client’s corporate systems.

There are already over 500 thousand mobile users of Remoto.

This is a good foundation for analyzing and monetizing Big Data. The solution provides businesses with data for various marketing tricks like user activity cards, customer profiles, drivers’ preferences, etc.

To sum it up on big data in the automotive industry

Even in the conservative automotive industry, there’s a place for Big Data. The toolkit available today has opened ways for a fundamentally new interaction with the client, which makes it more likely that they will return in the future and stay loyal.

Success borne through quality is never a fluke. Our team has shown great dedication and commitment...