I have an App Idea, but I'm not a Programmer

In my last post in this series, I dealt with whether it's possible to launch an MVP on a shoestring budget. Let's take a step back and look at the business practicalities of having an app idea from the very first moment of inspiration to sitting down with an engineer.

I have an idea for a web application

The muse has bestowed inspiration on you, congrats! Now's it time to take a hard look at your idea and decide whether to refine it, move on to prototyping it or whether you're better off shelving your new idea altogether.

If you're not a programmer (and since the title of this post includes "I'm not a programmer", I'm guessing you aren't, in fact, a programmer), it can be hard to quickly validate an app idea. Is my idea doable with today's technology or does is it a moonshot project that's going to require millions of dollars in research to even test whether the idea is viable? In the wake of the Theranos debacle, investors are looking for startups based in reality, not in fairytales of what might work in fifty years. With this in mind, I encourage non-technical founders, to hold off on technical validation until the last step.

The first step in validating an idea is understanding a problem

At eTeam, making useful products that help millions of people do something better or simplify their lives is one our core values. This is also one of the easiest ways to validate your app idea—does your idea have the potential to be useful? Notice I didn't say be cool, trendy or look good. Useful. I mean it.

It's only midmorning and I've already used nearly a dozen apps that do something for me. AirMail integrates into my GTD system so that nothing gets overlooked, Trello keeps track of bigger things going on, Asana keeps daily tasks organized. Each of these solves a concrete problem in my daily workflow.

Spend a day or two looking at the problem your idea solves and notice how this problem pops up in your day-to-day life. Take notes (maybe notice that many of the current note-taking apps leave a lot to be desired, another avenue for app ideas!) and refine why someone would use your app to solve a problem and how it would work.

A common mistake I come across is the desire to think of everything as a productivity app. That's a little too dystopian, even for a caffeine-fueled CEO like me. In economics, utility is about happiness and fulfillment as well as good ol' usefulness.

I love Instagram. Seeing snapshots in top instagram accounts from around the globe and staying in touch with friends that I don't see everyday solves a problem (being too busy to call 30 people a day to just chit chat a bit). Even an app built purely for fun and joy is useful and solves a real problem. 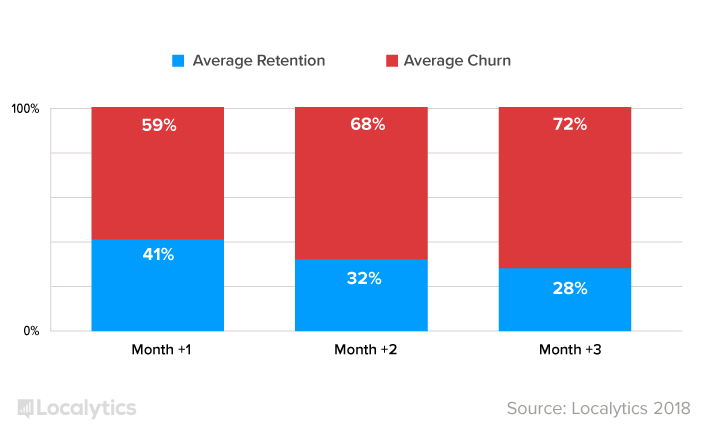 The percent of users who return to an app one month, two months, and three months after the app is downloaded

I have an idea for an app, how do I protect it?

So you've validated that your idea is useful and can potentially be turned into an app. Things are starting to get serious!

I have a friend that seems to have an app idea at least once a week. He announces each idea on Facebook and tells all his friends. While my friend isn't always serious about turning his app ideas into prototypes or full-fledged MVPs, screaming your app idea to the world still isn't a great idea at this stage. In fact, in more than one case a modified version of my friend's app idea was taken to market by someone else.

It's hard not to be overcome with excitement, but sober business thinking has to come first when you are protecting your app idea. Test your idea by yourself or within a small circle of trusted business partners.

When you begin reaching out to agencies to develop your app, make sure you have an NDA ready. If an agency is unwilling to sign an NDA, don't even consider them!

It's also worth looking for agencies or partners that are legal entities in a jurisdiction known for strong rule of law. If a company is registered in the US or EU and has employees from there, that agency is far more likely to comply with an NDA. The chances that you could enforce a contract with a freelancer from the other side of the world are basically nil.

There's no need to go full on tinfoil hat here. Think twice before going hog wild on social media about your idea and look for reputable agencies that operate within the law.

How to present an app idea to a developer

Developers do magical things and can be real ninjas when it comes time to making stuff work. Unfortunately, I've never met a developer that reads minds. That's why it's important to know how to present your idea a developer.

You can probably guess the product in the examples below:

Write several user stories to cover your target audience and the tasks that can be accomplished using your app. In my experience, having a few solid user stories is all it takes for a developer to understand whether your project is feasible from a technical perspective. An engineer will also be able to tell you what features would need to be built so that it’s possible to accomplish the goals mentioned in your user story.

Do you have an app idea you want to discuss?

If you have an app idea that you'd like to discuss, let's get in touch. Our experts can walk you through the process of going from idea to MVP and bringing your app to life.